Corinth was one of the most important city-states in Peloponnese and the richest in ancient Greece. A visit to the remains of the ancient Corinth allows visitors to admire the glory and power of the ancient past, but also the transition to a new chapter towards Christianity.

The almost-an -hour drive to ancient Corinth offers a beautiful view of the sea, small but significant islands and Greek nature. Our drivers and tour guides will make sure that you are comfortable while sharing the myths bounded with the area around you.

Before our visit to the site, we will make a stop to the Corinth Canal, which divides Peloponnese from the mainland of Greece. The attempts of the opening date back to the ancient times. However, it was realized in 1893, that Greece was a modern country, capable of sustaining projects like this.

After our short stop we will visit the archaeological site and the museum of ancient Corinth, which stands at the shadow of Acrocorinth.  Acrocorinth is the acropolis of ancient Corinth, a monolithic rock that stands 575 meters over the ancient city of Corinth. Acrocorinth was a natural fortitude having protected many generations in many occasions from the ancient times, to middle Ages when the Venetians conquered the fortress, to the Greek revolution in 1821. Before wandering around ancient Corinth, the small but significant museum will give a taste of the city’s advanced civilization. The art, such as mosaics as well as ritual and everyday items show a very refined culture for you to discover. Then the art will come alive as you walk among great architectural structures such as the temple of Apollo, and Bema, the place where St. Paul stood and talked to the people about the new religion.

Leave it to us to show you the coexistence of two worlds so different like the ancient and the Christian. Before heading back to Athens, you can enjoy your meal at a local traditional restaurant.

The Canal of Corinth, Temple of Apollon, Archaeological site and museum of Corinth

The duration of the chosen tour is 5-8 hours max but it is flexible and can be adjusted to your needs and interests. 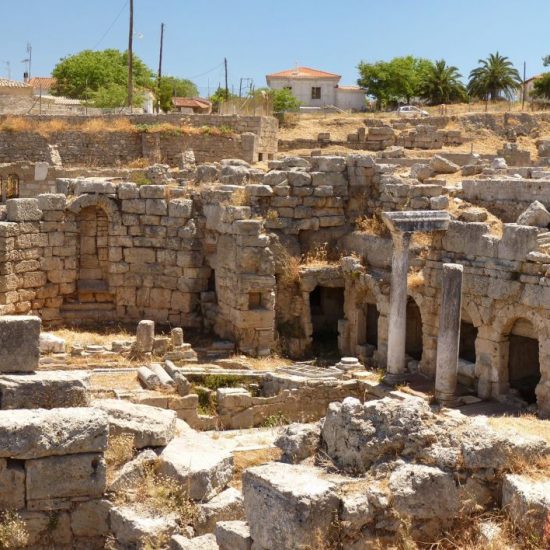 Entrance fees, food or drinks. Our driver will support you to receive the tickets during the day tour of Corinth.